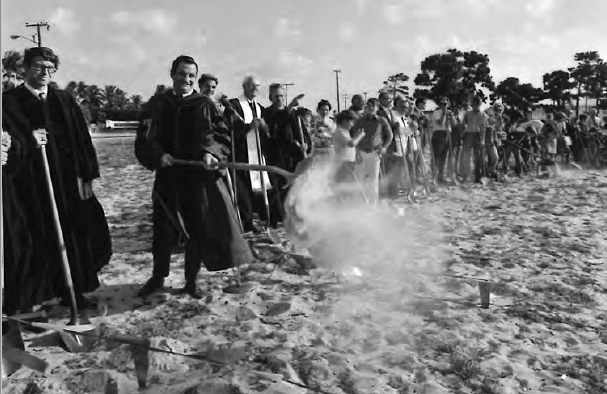 In the late 1960s, Coral Ridge had outgrown its original facility on Commercial Boulevard with the ever-increasing need to handle the expanding crowds, ministries, and the soon addition of Westminster Academy. The original plan was to expand the church’s property down Commercial Boulevard, but it became unfeasible to do so. It soon became clear that the congregation would have to build an entirely new structure.

Pastor D. James Kennedy had his eyes set on purchasing ten acres of land on Federal Highway, just north of Commercial Boulevard. A shopping plaza was intended to occupy the land, and the owner would not sell. But Kennedy would not take no for an answer.

Kennedy invited his friend Bill Bright, founder of Campus Crusade for Christ, down to Fort Lauderdale. For seven days, they prayed together over the land. They prayed that God would make it possible for Coral Ridge to purchase the property. And they prayed that from this land God would ignite a revival in South Florida and around the world.

God answered their prayer and on Easter Sunday of 1971, a groundbreaking ceremony was held for the construction of thenew church tower.

From Generation to Generation, we have seen God’s plan unfold through the prayers of our founders, from this property unto our city and the world.