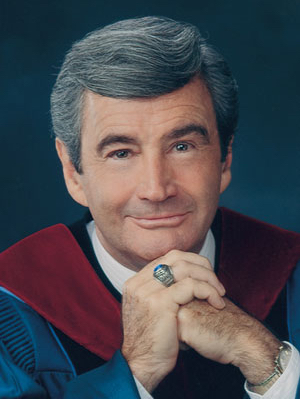 The passion of D. James Kennedy was to bring the light of Jesus Christ into the lives of people everywhere. Men and women on every continent and in every nation have heard and answered the call of the Gospel because of Kennedy's faithfulness to the vision God gave him to reach the world for Jesus Christ.

Kennedy strongly believed that the Christian should not only be involved in spiritual matters but should also be active and knowledgeable as citizens in our neighborhoods, cities, and nation. Consequently, Kennedy was well known in both the church and political realm. He became the most listened to Presbyterian minister in the world and was also recognized as one of the leading Christian statesmen of his day.

From 1974-2007, Room 404, Pastor's Study, in the Sanctuary tower housed over 10,000 volumes from Kennedy's book collection and served as his place of study, sermon preparation, and book writing. In 2017, the space was restored and renovated to preserve and honor Kennedy's legacy. The library now tells his story of making a global impact for Jesus Christ and seeks to inspire future generations and to deepen their faith through the study of God's Word.

Click below to view a video tour of the D. James Kennedy Memorial Library.